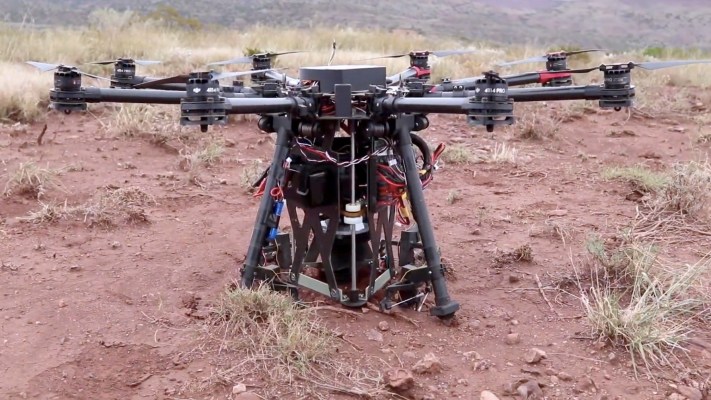 A new drone from the NIMBUS group at the University of Nebraska can fall out of a plane, parachute down, fly to a certain place, dig a hole, hide sensors inside it and then fly away like some crazy wasp. Robots are weird.

The goal of the project is to allow drones to place sensors in distant and hostile environments. The system starts on a plane or helicopter, which ejects the entire thing inside of a cylindrical canister. The canister falls for a while, then slows down with a parachute. Once it’s close enough to the ground it pops out, lands and drills a massive hole with a screw drill and leaves the heavy parts to fly home.

Drones can only fly for so long while carrying heavy gear, so this ensures that the drone can get there without using battery and escape without running down to empty.

“Battery powered drones have very short flight times, especially when flying with a heavy load, which we are since we have our digging apparatus and sensor system. So to get to distant locations, we need to hitch a ride on another vehicle,” said NIMBUS co-director Carrick Detweiler to Spectrum. “This allows it to save energy for return trips. In this video we used a much larger gas powered UAS with multiple hours of flight time, but our same system could be deployed from manned aircraft or other systems.”

The drone can even sense if the ground is too hard for digging and choose another spot, allowing for quite a bit of flexibility. Given that these things can land silently in far-off locations, you can imagine some interesting military uses for this technology. I’m sure it will be fine for us humans, though. I mean what could go wrong with a robot that can hide things underground in distant, unpopulated places and escape undetected?