Blimey, it’s all going down in Albert Square. One week after confirming the return of Sean Slater, the Beeb has now announced that Ben Mitchell – son of Phil ‘Philthy’ Mitchell himself – is returning again. With a new head. I’m not quite sure why they keep recasting Ben, but presumably they’ll get it right eventually… right?!?

Last but not least, Danny ‘I’m fucking Danny Dyer’ Dyer struck TV gold when his show, Danny Dyer’s Right Royal Family’ became a massive hit with viewers. To be fair, it was a right laugh. He lived like a viking (nearly throwing up after eating a sheep’s tongue in the process), and reckons King Louis XI was ‘a rather splendid chap.’ He even found out he could be king. *Could be…*

We’ve known that Ninty’s hybrid console has been selling like an album of rare Led Zeppelin studio outtakes, but it’s only now we know just how well it’s done – at least in the US, anyway. The NPD Group reports that Switch was the best-selling console in 2018. If that wasn’t enough, Super Smash Bros. Ultimate set a new record as the fastest-selling console exclusive launch in NPD history, while Mario Kart 8 now ranks as the second best-selling racing game ever in the US. Blimey.

Demon’s Souls is a prime candidate for a remaster, right? It’s an ‘old game,’ it’s part of a much-loved series, and fans have been pretty vocal about a revamped version for a while now. While Sony are the ones who would have to give the green light to the project, creator Hidetaka Miyazaki isn’t that fussed about a remaster. In fact, he says that it’s a bit embarrassing looking back at his previous work, likening it to that of a writer glancing back at previous works. I can relate. Ugh.

Mortal Kombat 11 cross-platform play is being looked at, says NetherRealm

Cross-play is becoming more common now that Sony finally hopped on the bandwagon last year, and if NetherRealm has its way, Mortal Kombat 11 will also support the feature. Fighting games are an obvious candidate for cross-play, so hopefully this’ll happen and people across all formats will be shattering skulls and breaking bones together. Speaking of MK11, it’s shaping up rather nicely.

Most charity gaming streams tend to last around 24 hours, which is nothing to turn your nose up at. However, Harry Brewis decided this wasn’t quite enough, pulling off a mammoth 50-hour stream of Donkey Kong 64 in aid of the charity Mermaids. In his own words, Brewis wanted to ‘destroy’ the game – something which he most definitely did. In the end, his efforts raised over $345,000 for the cause, which is fantastic news.

Metroid Prime 4 rebooted with Retro Studios, but is a long way off

Nintendo confirmed this week that Metroid Prime 4 has been taken back to the drawing board, with original series developer Retro Studios now overseeing the project. That’s good news, obviously, but it does mean the game has been delayed and won’t be seeing the light of day for quite some time. Metroid Prime 4 was originally in the works at a studio at Bamco, although apparently after nearly two years, the project didn’t meet the quality expected of a Metroid game. Let’s hope Ninty has something else to fill the gap in the meantime, eh? Metroid Prime Trilogy for Switch, perhaps? Still, props to the Big N’s transparency with this one.

Netflix is reportedly working on a Resident Evil TV series

Resi is hot property right now, what with the excellent remake of Resident Evil 2 out in the wild and the fact the movies are getting rebooted. All that’s missing is a TV show, right? Well, that might also be on the cards, according to a Deadline report. Streaming giant Netflix is apparently working on a show based around Capcom’s survival horror behemoth, although I’d be more excited if it weren’t for the fact Constantin Productions (the folks behind the Paul Anderson films) are attached to the project.

Ubisoft took a massive stumble with Shadow Heritage. Assassin’s Creed Odyssey is a game that champions player choice, but its extra content took that very thing away from players. . I won’t spoil the details, but suffice to say it revolves around the romantic path you took Alexios or Kassandra on. Still, Ubisoft has now admitted its mistake, and has confirmed it will be tweaking the DLC to better reflect your choices. It’s a pity other developers aren’t willing to do the same, like BioWare did with  Mass Effect 3. 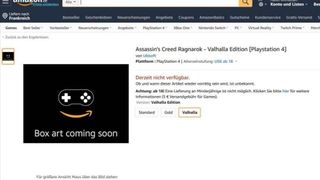