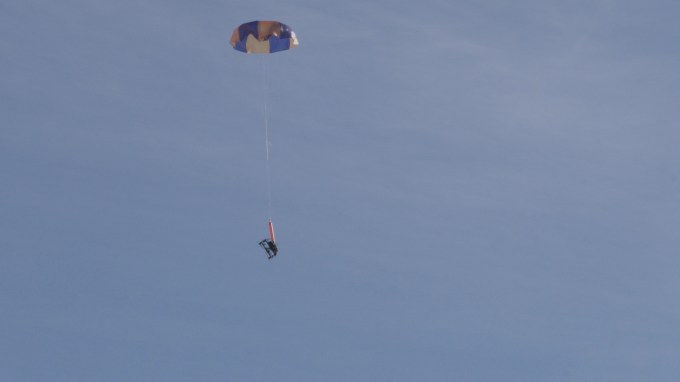 Most of the time, commercial and personal drones are not allowed to fly over groups of people. For safety, obviously. Indemnis’ drone parachute changes that. The company’s product was just certified to allow operators to legally fly drones over small groups of people. This is the first time such a device received the certification.

Indemnis Parachute for DJI Drones straps onto DJI’s large drones and features a launcher that deploys a parachute when sensors detect flight anomalies.

To become certified, the Alaska-based company’s product had to pass a series of obstacles that included 45 functionality tests across five different failure scenarios. The tests were designed to ensure the parachute deploys at the right time, every time.

According to a press release, the product works like this:

“Nexus is a ballistic parachute launcher, triggered automatically if the drone suddenly begins tilting abnormally or falling. It deploys the parachute within 30 milliseconds at 90 mph, through a tube that rapidly inflates to keep the parachute lines away from the drone body and propellers. Indemnis offers the Nexus package today for the Inspire 2, and intends to offer it for Matrice 200 series and Matrice 600 series drones by late 2019.”

A handful of companies are attempting to address drone safety, and parachutes are one solution. Often, the products are designed to protect bystanders and the drone itself. DJI has yet to build a parachute into one of its products, though.

Daily Crunch: How the government shutdown is damaging cybersecurity and future IPOs

Daily Crunch: How the government shutdown is damaging cybersecurity and future IPOs
See you tonight in Vegas
Comment